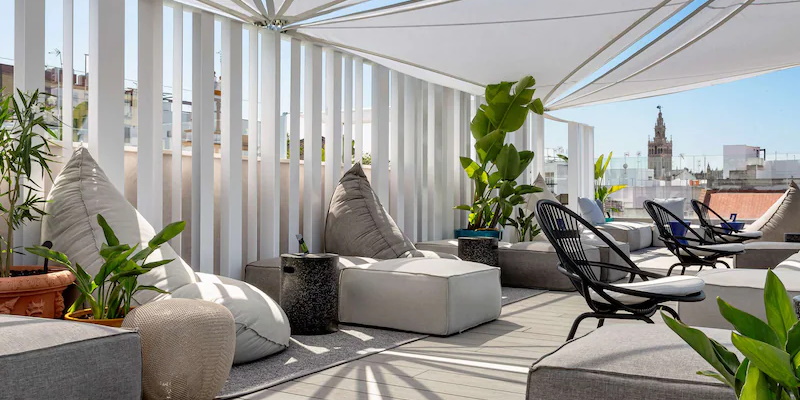 Set on a palm-tree lined, pedestrian square, Radisson Collection Hotel, Magdalena Plaza Sevilla has opened its doors to welcome the exceptional to Spain. This is Radisson Hotel Group’s first Radisson Collection hotel in the country. Located in the heart of Seville and on the doorstep of royal palaces, theaters and museums, the five-star hotel proudly presents innovative Spanish cuisine by Michelin star chef Eneko Atxa and chef Manuel Berganza.

The hotel’s elegant design draws inspiration from the city’s history and mix of architectural styles throughout its guest rooms, restaurants and rooftop bar and pool, as one of Spain’s most prestigious hotel projects. The launch of the hotel is part of Radisson Hotel Group’s ambitious growth plan in Spain and the Group’s first hotel opening in Spain under the Radisson Collection brand, renowned for offering exceptional service and guest experiences.

“Radisson Collection brings together emblematic hotels in unique locations worldwide that stand out for their exceptional style and authenticity. They are designed to be different in each of the cities where they are located such as Moscow, Milan, London, Copenhagen, Bodrum and Shanghai”, explains Federico J. González, CEO of Radisson Hotel Group and adds: “Seville is a perfect destination to introduce the first property of this brand in Spain”. There are currently more than 40 Radisson Collection hotels – in operation or under development – worldwide present in over three continents.

Radisson Collection Hotel, Magdalena Plaza Sevilla has 89 rooms, including five suites – two of them being penthouse suites with private spacious terraces and spectacular views – a pool, solarium, gym and two exclusive restaurants. The 89 rooms and suites are designed to be restful and stylish. The refined palette of bronze fittings, translucent glass, marble and parquet floors is accented by soft blue furnishings. On the walls, black and white photographs of Seville have been curated to celebrate the architecture and urban life of the city. Bathrooms feature round mirrors and a custom-designed vanity by the architects; the curve of its bronze drawer echoes the architecture of the hotel.

Seville now has a trendy new gourmet destination with two innovative masters at the helm who have joined forces to make Radisson Collection Hotel, Magdalena Plaza Sevilla an unmissable stop for gastronomy lovers. Renowned Chef Eneko Atxa, who has been awarded five Michelin stars, has brought his Basque Eneko concept to the hotel. His informal, modern cuisine – a perfect trilogy of flavor, texture, and aesthetics – is based on traditional Basque recipes with local touches. Meanwhile, the hotel’s Justa Rufina restaurant which is part of Azotea Grupo and overseen by Chef Manuel Berganza, includes a terrace on street level, a restaurant on the ground floor and a roof top terrace offering a relaxed cocktail bar and spectacular views.

The famed architects, Borgos Pieper, have completed the five-star Radisson Collection hotel and transformed Plaza de la Magdalena in the historic center of Seville to achieve top sustainability levels. The LEED Gold certified project has entirely reinvented two buildings, which together define the western edge of the square: ‘Magdalena’, and ‘Rioja’, a smaller building bordering Calle Rioja with swimming pool and large landscaped terrace on the roof. The calm and refined design approach draws inspiration from the area’s rich history and Seville’s mix of traditional architectural styles. The overall impression is contemporary but respects traditional rhythm and proportions: the stone facade is rustic at ground level, in contrast to the smooth blockwork above.

The hotel entirely runs on renewable energy, consumes 40% less water than the reference building and has achieved the LEED Innovation credit for creating a ‘Walkable Project site’, which consists of incorporating design elements that promote walking, cycling, and other non-motorized transportation in the hotel location and its surrounding community. The building has achieved Spain’s first LEED (Leadership in Energy and Environmental Design) Hospitality Gold level.

In contrast to the restrained, classical façade, the core of the building is contemporary. In the Magdalena building, curvilinear, white-paneled corridors surround a central, top-lit staircase. Above ground level, the Rioja building is organized around a glazed courtyard, which brings daylight deep into the plan – 4 Liquidambar trees bring the greenery of the square into the hotel.

“Our design approach came from our research, studying Seville’s buildings, learning about Plaza de la Magdalena’s history. We felt that the architecture didn’t have to shout or compete for attention. It could be calm in its proportions, scale and relationship with the square. We were looking to the past and the future at the same time, considering what felt right – the result is a building that is of its place, but also of its time,” explains Etienne Borgos, Borgos Pieper.

Located in the buzzing city center, on the elegant Plaza de la Magdalena, guests are only a few minutes away from many of Seville's iconic attractions, such as the Santa Maria Magdalena Church, Plaza Nueva's luxury shopping area, and the Museum of Fine Arts. The hotel is located on the site occupied in the 19th century by the Gran Hotel de Paris, a historical icon which brought European luxury standards to the city that stands on the Guadalquivir River. “A great design - that is at the same time functional, respectful of the environment, and beautiful - will always add value to the city, in both spiritual and economic terms”, says Javier Illán, CEO of Millenium Hotels Real Estate, the developer and owner of the project.

In 2018, Radisson Hotel Group started an ambitious plan to transform the company. For the Spanish market, the ambition – always with a prudently optimistic approach – is to open more than 20 hotels within the next five years. In the coming months, another Radisson Collection hotel will open in Spain, in Bilbao, and later Spain’s first Radisson RED lifestyle property will open its doors in the center of Madrid. In Madrid, guests can already enjoy the newly renovated and renowned Radisson Blu Hotel, Madrid Prado.