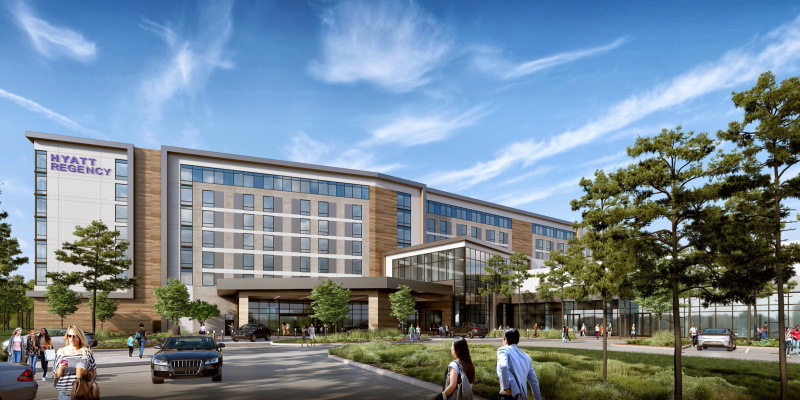 The City of Conroe is proud to announce the planned early September groundbreaking of Hyatt Regency Conroe and Convention Center. Working with development manager Garfield Public/Private, the City announced Grand Central Park master-planned community will be home to the 250-room upper-upscale Hyatt Regency hotel and convention center. Work began on this ambitious project in 2015 at the direction of the City Council and CIDC; however, it has dramatically accelerated over the last two years.

Conroe’s new Convention Center, located in a prime location on I-45 just south of Loop 336, will attract conferences, executives and groups doing business in the area, as well as weekend leisure travel.

“This is a landmark day in the history of our City. Hyatt Regency Conroe will be another jewel in the crown of America’s Miracle City. We’re not only thrilled to see this fantastic project move forward but are also excited about the economic development opportunities it brings along with it,” said Mayor Jody Czajkoski.

“We look forward to introducing a Hyatt Regency hotel to Conroe and be part of this exciting new development project. The Hyatt Regency brand resonates with business and leisure travelers alike and the hotel’s facilities and amenities, paired with its proximity to the convention center, are expected to offer a seamless, intuitive experience for guests,” said Kimo Bertram, Hyatt’s vice president of real estate and development. “Hyatt is thrilled to collaborate with the City of Conroe and Garfield Public/Private.”

With an anticipated opening in the second quarter of 2023, the hotel will include amenities such as a full-service restaurant, full bar, pool deck, fitness facility, and a market. The convention center will consist of 41,000 square feet of space, including a 15,000 square foot grand ballroom, 8,000 square foot junior ballroom, 8,000-square-feet of breakout and boardrooms, and pre-function space. Multiple conferences, weddings, and other events can take place simultaneously, as well as fine dining and entertainment for city residents.

According to the City’s Assistant City Administrator/CFO, Steve Williams, the project is financially self-sustaining. The full cost of operations and debt service is expected to be paid utilizing revenues and taxes generated from the hotel and convention center revenues.

“There’s no burden on the local taxpayer,” said Williams. “I couldn’t be more pleased with the timing of the sale of the bonds utilized for this project. We were able to successfully issue debt at historically low interest rates, which will save us millions of dollars of interest long-term.”

The Mayor thanked the City of Conroe employees and partners who are part of this project.

“As we take this exciting step forward, I want to express my appreciation to all the great City of Conroe employees who are working hard on the Hyatt Regency Conroe and Convention Center project. It’s Conroe’s time to shine and we couldn’t have done it without them,” said Mayor Czajkoski.

The term “Hyatt” is used in this release for convenience to refer to Hyatt Hotels Corporation and/or one or more of its affiliates.
Tags: Hyatt, Hyatt Regency, New Signings, United States
Newer Post Older Post Home