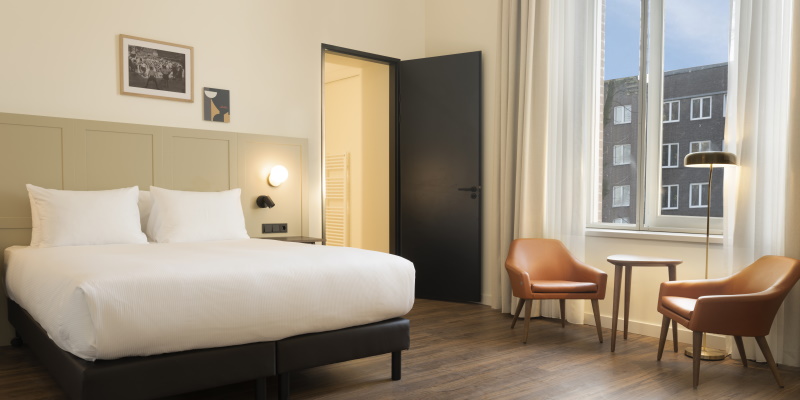 Hilton (NYSE: HLT) has today confirmed significant expansions to its DoubleTree by Hilton portfolio, with the announcement of six new European hotels in Italy, France, Romania, Hungary, the Netherlands and Germany. DoubleTree is Hilton’s fastest growing full-service brand in Europe, with 37 hotels expected to open in the region in the next five years, and the hotels join 120 DoubleTree by Hilton properties currently operating in Europe.

Patrick Fitzgibbon, senior vice president, development, EMEA, Hilton said, “Since its arrival in Europe in 2008, DoubleTree by Hilton has continued to lead the way for European upscale growth, now operating in 19 countries with plans to launch in seven more in the coming years. A brand highly suited to capture owner demand for conversion properties, DoubleTree by Hilton’s considerable global reputation and loyal customer base makes the brand an attractive opportunity for development. With Hilton reaching 600 hotels across Europe, Middle East and Africa, 140 of which are under DoubleTree by Hilton, these six hotels are strategically located to capture the growth in consumer preference and business demands while marking an entry for Hilton into new destinations.”

Shawn McAteer, global brand head, DoubleTree by Hilton, said, “DoubleTree by Hilton’s robust growth in Europe and debut in new destinations throughout the region allow us more opportunity to deliver the warm welcome and signature hospitality that guests have come to expect from the acclaimed brand. Offering contemporary accommodations, state-of-the-art meetings and events space, thoughtful wellness amenities and unique dining experiences, these new properties continue to exemplify the brand’s successful global growth strategy and are well prepared to welcome business and leisure travelers from around the world.”

DoubleTree by Hilton Sittard – the Netherlands

Newly opened in December 2021, DoubleTree by Hilton Sittard follows a franchise agreement with Black Label Hospitality. The historic building houses 90 rooms, all-day dining in the hotel’s French restaurant, a fitness centre, meeting and events spaces and the exceptional Bar Bisco in the property’s former chapel. The hotel is five minutes’ walk from the main attractions of the city, including the plethora of 16th and 17th-century buildings, while also being a short drive into Germany and Belgium. DoubleTree by Hilton Sittard is Hilton’s first hotel in the Dutch province of Limburg and presents a unique opportunity for Hilton to capture business and leisure travel from local, national and international travellers.

Following a franchise agreement with Schweizerhof Hotel GmbH & Co. KG, DoubleTree by Hilton Hannover Schweizerhof opened in December 2021 with plans for a staged investment strategy over the spring and summer that will elevate the hotel’s already enviable facilities. As Hilton’s first hotel in Hannover, the capital of lower Saxony and one of the leading exhibition cities in the world, the hotel will help the city host more than 60 international and national exhibitions annually. The 200-room hotel is conveniently located less than one kilometer from Hannover’s banking and court district and in close proximity to Hannover train station. Amenities include a bistro restaurant and bar, 880 square meters of meeting space, and wellness & SPA facilities.

DoubleTree by Hilton Lyon Eurexpo is Hilton’s first DoubleTree property in France and is based in Lyon, France’s third largest city, situated at the confluence of the Rhône and Saône rivers. Opened in January 2022, the contemporary hotel offers 141 guest rooms, four modulable meeting rooms and a fitness centre. The hotel is located at the Technological Park of Saint-Priest, home to over 200 companies and minutes away from the Lyon Eurexpo Exhibition Centre, which is the second largest exhibition venue in France. Operating under a franchise agreement with SARL Société de l´Hotel du Lac, the hotel will be managed by Solanet Gestion Hôtelière.

Expected to open in April 2022, DoubleTree by Hilton Milan Malpensa Solbiate Olona will join seven other DoubleTree by Hilton properties operating in Italy. The 246-room hotel will open following a franchise agreement with GDF Group, an established partner for Hilton in Italy. Both Malpensa airport, Italy’s second busiest airport, and the Malpensa Fiere exhibition venue, which welcomed over 250,000 exhibition goers in 2019, are a 15-minute drive away, while central Milan is 25 minutes away. The hotel’s Convention Centre, which will include seven meeting rooms, will also provide meeting facilities to surrounding businesses.

Debuting as the first DoubleTree by Hilton property in Hungary, DoubleTree by Hilton Budapest Buda Hills Hotel and Residences will be situated in Pösingermajor, a prime neighbourhood in the capital of Hungary. The city is one of Central Europe’s leading financial and culture centres, and home to UNESCO world heritage sites such as Andrássy Avenue and Heroes’ Square. The stunning hotel is expected to open its doors in 2023, featuring wellness & spa facilities, a swimming pool and meeting space. The hotel will open following a franchise agreement with Rupphegyi Kft, a Hungarian real estate development and management company.

DoubleTree by Hilton Brasov City Centre is set to launch as the first Hilton hotel in Brasov, Romania’s most visited city after Bucharest, famous for its rich medieval history. The upscale hotel will be ideally located in the heart of Brasov city centre, offering easy access to the city’s six industrial parks and the historic old town to appeal to leisure and business travellers. Currently scheduled to open in 2024, amenities will include a sky bar, a casino with a separate entrance, meeting facilities, and a fitness and wellness centre. The property will operate under a management agreement between Hilton and Crown Venus Residence Estate SRL.

Guests of all properties will be able to benefit from the award-winning Hilton Honors guest loyalty programme, allowing more than 123 million members who book directly with Hilton to gain access to instant rewards and benefits, such as contactless check-in with room selection, exclusive member discounts, and Digital Key and Connected Room.

Since its introduction to Europe in 2008, Hilton has continued to grow its DoubleTree by Hilton brand to meet market demands for upscale hotels, opening 10 hotels last year in locations including London, Frankfurt and Brussels. As Hilton’s fastest growing upscale brand in Europe, DoubleTree by Hilton expects to open another 24 hotels over the next two years, joining more than 120 hotels already trading in the region.