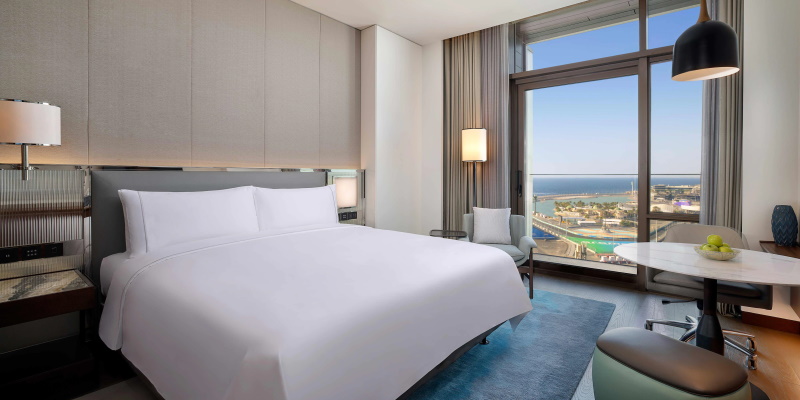 Shangri-La Jeddah, a new luxury landmark on the Jeddah waterfront and the Red Sea, officially opens its doors today, marking the brand’s debut in the Kingdom. The hotel is set to welcome guests with Shangri-La's signature Asian hospitality and offers access to the city’s premier shopping destinations and the Jeddah Corniche Circuit, home to the Saudi Arabia Grand Prix and one of the fastest street circuits in Formula 1.

Situated in the exclusive Burj Assila, a 64-storey architectural icon and Jeddah’s tallest building – a soaring 260-metre-tall tower – Shangri-La Jeddah celebrates the brand’s Asian heritage while reflecting the local culture and environment. The hotel’s aesthetics pay homage to Shangri-La's timeless style while elevating it to meet the evolving needs of modern travellers. Interiors draw on the three main elements of the brand’s new design ethos: Asian Sensibilities, Nature Inspired, and Spirit of Place.

Inspired by the natural elements around the Corniche, the hotel’s interiors are rendered in shades of blue, white and grey, while carefully considered features allow natural light to infuse public areas and guest rooms. Further creating a spirit of place and reflecting the surrounding nature, the 220 stylish guest rooms and suites and 17 serviced apartments, feature floor-to-ceiling windows that offer sweeping views over the Red Sea and the Jeddah skyline, along with nautical accents of light wood panelling and blue patterned carpets, and spacious balconies that fully immerse guests in the serenity of the waterfront.

Enhancing the guest experience, Shangri-La Jeddah has a Wellness Club with facilities for both men and women. Guests will find a menu of bespoke treatments at The Spa at Shangri-La, a state-of-the-art gym, and a tranquil 25-metre outdoor swimming pool with spectacular sea views. As part of its family experiences, the hotel also incorporates a Kids’ Club that hosts a roster of interactive activities and entertainment that allows families to spend quality time together.

With some of the city’s most extensive and versatile event space, including the 960-square-metre Shangri-La Grand Ballroom which features floor-to-ceiling windows overlooking the Red Sea, the hotel is set to become the city’s most popular venue for weddings and events.

Shangri-La Jeddah forms part of the two-billion Saudi Riyal, 60,015-square-metre mixed-use development project which is also home to 116 state-of-the-art Burj Assila Residences which are available for sale. The hotel is fully committed to supporting Saudi Arabia’s Vision 2030, and Saudis make up approximately half of the hotel colleagues who are ready to welcome guests to a place steeped in centuries of Arabian culture and Shangri-La's heartfelt hospitality.