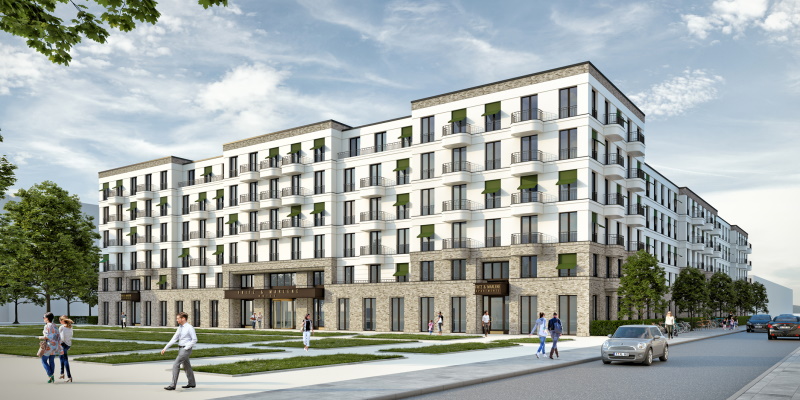 Hilton (NYSE: HLT) announced plans to open six hotels under its focused service brands in Germany, Italy, the U.K. and Poland as part of significant growth for the brands’ European portfolios. With openings planned in Berlin, Potsdam, Venice, Bologna, Plymouth and Szczecin, the hotels will join more than 60 Hilton Garden Inn and 100 Hampton by Hilton hotels currently trading in Europe.

Patrick Fitzgibbon, senior vice president, development, EMEA, Hilton said, “Hilton Garden Inn and Hampton by Hilton are two of Hilton’s fastest-growing brands, with more than half of our European development pipeline by hotel under these two brands. Hilton has established one of the most successful and sought-after franchise support models in European hospitality, with over 350 hotels now operating with our established partners and a further 170 new hotels in our pipeline. Hilton Garden Inn and Hampton by Hilton are popular with guests, and have a proven track record in a range of locations, from regional towns to major capitals, airports to sporting stadiums, making them an attractive opportunity for investors. Now operating in 23 European countries and with plans to open in seven new markets in the next five years, value-conscious guests will be able to experience Hilton’s industry-leading hospitality in a growing number of places.”

In the past year, Hilton opened 23 Hilton Garden Inn and Hampton by Hilton properties in Europe, with entries in new markets such as Wales, with Hilton Garden Inn Snowdonia, and Latvia with the newly opened Hampton by Hilton Riga Airport. With debut hotels planned in several cities including Szczecin, Bologna, Potsdam and Plymouth, the brands are continuing their expansion into new regional locations throughout Europe, and strengthening their presence in major cities such as Berlin and Venice.

Located in a prime spot overlooking Plymouth Hoe, Hilton Garden Inn Plymouth will be equipped with a sky bar, offering panoramic views of the world-famous natural harbour Plymouth Sound. Hilton’s first property in the British port city, the 150-guest room hotel will be located close to historical sites including the Royal Citadel and Smeaton's Tower lighthouse. The development of the hotel is expected to be in late 2023, following a franchise agreement with Propiteer Hotels Limited.

Hilton Garden Inn Bologna North will be Hilton’s first property in Bologna, the capital of the Emilia-Romagna region in Northern Italy. Home to the Porticoes of Bologna, a UNESCO World Heritage Centre, Bologna welcomed more than three million visitors in 2019. The hotel will offer 130 guest rooms, four meeting rooms, a gym, and 80 outdoor car parking spaces. The hotel will be located in the Quarto Inferiore industrial area, where various multinational companies are located, and the city’s main historical centre is located just a short drive away. Expected to open in spring 2023, the hotel will operate under a franchise agreement with Piazza Hotels & Residences Srl, an established Italian operator.

Venice is set to welcome its first Hampton by Hilton, following a franchise agreement with Apex Alliance. The hotel will be on the island of Tronchetto within easy reach of central Venice via the vaporetti water buses, which stop in front of the hotel. Piazzale Roma, the major transportation hub and part of the historical centre of Venice, is also just four minutes away via the city’s People Mover shuttle trains. Planned to open by spring 2024, the 324-guest room hotel will be one of the largest in Venice, offering a breakfast zone and bar, two meeting rooms, a fitness centre and a dedicated Work Zone.

Hampton by Hilton Berlin Airport West will be Hilton’s first property at Berlin Brandenburg Airport, the German capital’s international airport. Opened in 2020, the airport replaced Berlin Tegel Airport and Berlin Schönefeld Airport, which combined saw more than 35 million passengers in 2019. Scheduled to open in September 2024 and operating under a franchise agreement with long-standing Hilton partner tristar GmbH, the hotel will offer 196 guest rooms, a breakfast area and bar, a gym, and 150 parking spaces. The airport’s terminals and the city centre are easily accessible by train in less than five minutes and 35 minutes respectively.

As part of a franchise agreement with established partner and operator Signo Hospitality, Hampton by Hilton Potsdam will be the first Hilton property in Potsdam, situated in close proximity to Filmpark Babelsberg, a working film studio and theme park, offering visitors a behind-the-scenes look at the film industry. The city also boasts strong historic heritage with landmarks such as Sanssouci Palace, the summer palace of former Prussian King Frederick the Great. The 163-guest room hotel is expected to open its doors in June 2024, providing amenities including a breakfast area and bar, a meeting room, and gym.

Following a franchise agreement with Szczecin Hospitality Group Sp. z o.o., Hampton by Hilton Szczecin East is set to open its doors in January 2024, becoming the first Hilton property in Szczecin, Poland’s seventh-largest city and home to the country’s largest commercial seaport. Szczecin is directly connected to other European countries by railroad and ferries, including Germany, the Netherlands, Czech Republic and Sweden. The 103-guest room hotel will be situated in the heart of the commercial district of Szczecin, on the east side of the Oder River. Amenities will include a business hub, a fitness centre and two meeting rooms, which can be converted into one larger meeting room for events.

Guests of all properties will be able to benefit from the award-winning Hilton Honors guest loyalty programme, allowing nearly 128 million members who book directly with Hilton to gain access to instant rewards and benefits, such as contactless check-in with room selection, exclusive member discounts, and Digital Key and Connected Room.