Expected to Open in 2025, JW Marriott Hotel Tokyo Will Make Its Long-Awaited Debut in the Capital of Japan 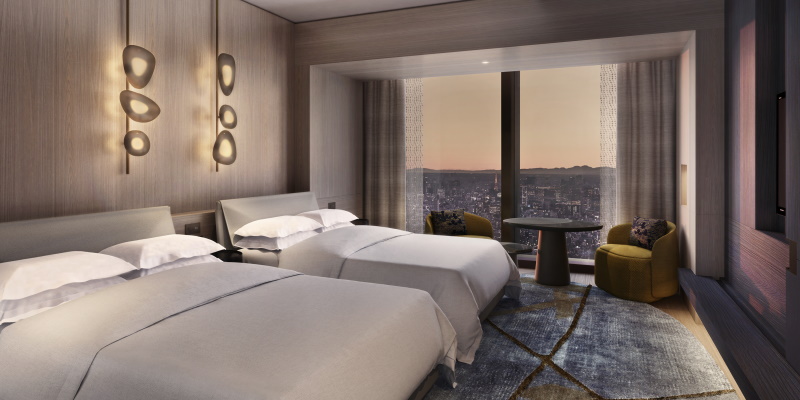 Marriott International, Inc. today announced it has signed an agreement with East Japan Railway Company to bring the JW Marriott brand to Tokyo, Japan. The hotel is located in the heart of Tokyo between Shinagawa and Tamachi Stations and is a key component of JR East’s extensive redevelopment project of the former JR Shinagawa Depot Railway Yard. The hotel is expected to open in spring 2025.

“We are thrilled to work with East Japan Railway Company to expand one of our flagship brands in Japan with the signing the new JW Marriott Hotel Tokyo,” said Karl Hudson, Area Vice President, Japan and Guam, Marriott International. “The new luxury hotel will mark the second JW Marriott hotel to open in Japan and will welcome guests to an oasis of peace and serenity in the bustling heart of Tokyo.”

JW Marriott Hotel Tokyo is slated to feature 200 well-appointed guestrooms and suites. The interiors, led by Yabu Pushelberg, will be balanced, subtle, and elegant with deep indigo as the accent colors. An indulgent mix of dining options include an all-day restaurant with a semi-open kitchen, a specialty restaurant, and a lobby lounge which will feature a unique Croissant Bar. Plans also call for a spacious Executive Lounge, a 25-meter indoor swimming pool, a fitness center, and the brand’s signature Spa by JW. In addition, the hotel will feature 740-square meters of event space, as well as 250-square-meters of pre-function event space, making it a prime destination for small to medium scale events.

The Takanawa Gateway Urban Development project will span four blocks and will include the Takanawa Gateway station and a mixed-use development, which is expected to become Tokyo’s newest international township. Comprising of five buildings, this development expects to feature residences as well as commercial facilities, a convention, and a conference center. JW Marriott Hotel Tokyo is slated to occupy the 22nd to the 30th floors of the Station Complex Building (South) and will be situated within walking distance of the Shinagawa Station, the terminus for the upcoming Linear Chuo Shinkansen, set to connect Tokyo with other major cities in Japan. The hotel is also located within a 15-minute drive to Tokyo Haneda Airport, making it easily accessible to both domestic and international visitors.